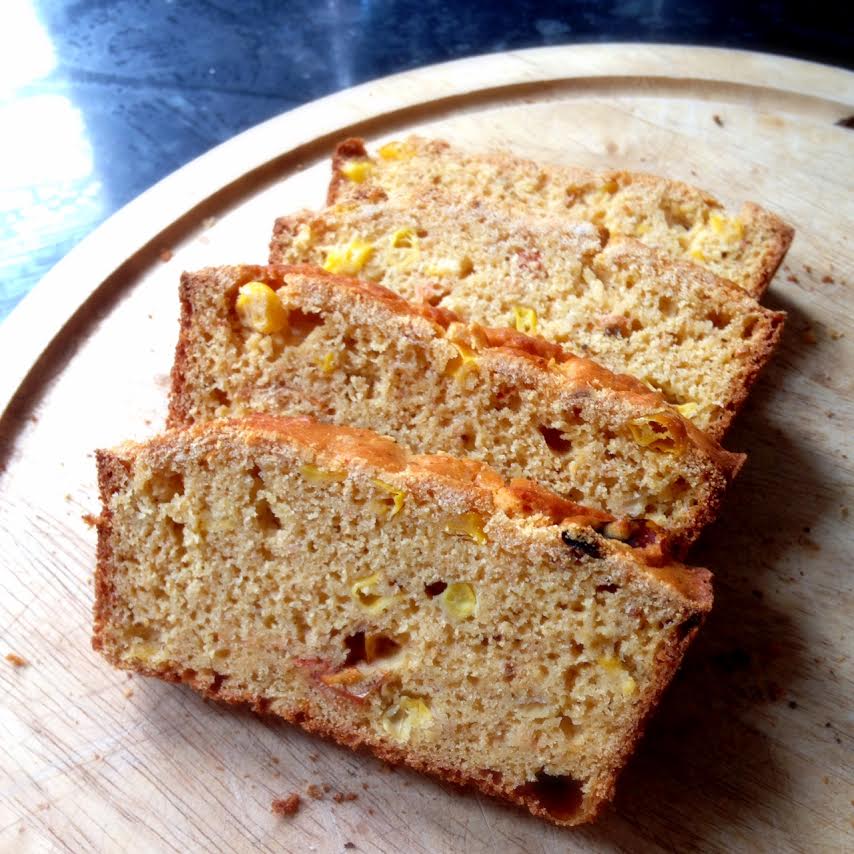 I was really struggling with the title for this post. But essentially this is a gluten sensitive bread baked with cornmeal and spelt flour, it’s at this point that I should add that if you’re a celiac or very sensitive to gluten you should probably replace this with a gluten-free flour of your desire (rice flour works well). Anyway, I’ve always loved cornbread, but maybe because I’m a bit greedy, I have always preferred the loaded variety. So within the bread you’ll find kernels or corn, bits of chilli, oven dried tomatoes and waves of cumin. This is also a buttermilk free recipe and I’ve substituted it with almond milk, mostly because buttermilk is just so damn hard to find (read: it wasn’t in any of my local shops with in a 100 metre walking radius to my flat)…and I really just wanted to eat warmed slices of this bread with butter and Vegemite dammit! Would also work quite well with plain yogurt instead of the almond milk if you want it to be richer.

It’s a fast bread to make (bonus) and bakes in a large 9 inch bread tin, but I split it into 2 tins just in case it rose too much.

First get the oven to 200 °C and prep your baking tins with butter and line the bottom with baking parchment. Quarter the cherry tomatoes and place them on a lined baking tray, evenly space each of the quarters out. Liberally sprinkle with the cumin seeds and paprika with a pinch of salt and cracked black pepper to season. Place the tomatoes in the oven and wait for them to cook down, maybe 20 minutes. While that’s cooking, melt the butter and set aside. Get the cornmeal, flour, teaspoon of salt, baking powder, sugar into a stand mixer (or mix by hand if you’d like, you must have strong arms) on medium speed until well combined. In a separate jug, mix the eggs, butter, almond milk and honey. Poor this mixture in with the dry ingredients slowly until incorporated. Remove the bowl from the mixer and use a spatula to fold in the tomatoes and all the spices (slide everything off that baking sheet), then add the onion, chilli and corn until everything is gently but evenly dispersed.

Put the mixture into you prepped baking tins and bake for at least 40 minutes. But keep checking with a skewer to see if your bread’s done. It should be golden brown on the top and the skewer should come out clean. Turn out of tins and cool.

I couldn’t resist eating a couple of slices of this hot out of the oven with some butter and said Vegemite. It was a craving that just had to be done. Also had some with Marmite. Just as good. Later in the evening I had this with chicken stew…you know it’s just so damn tasty…