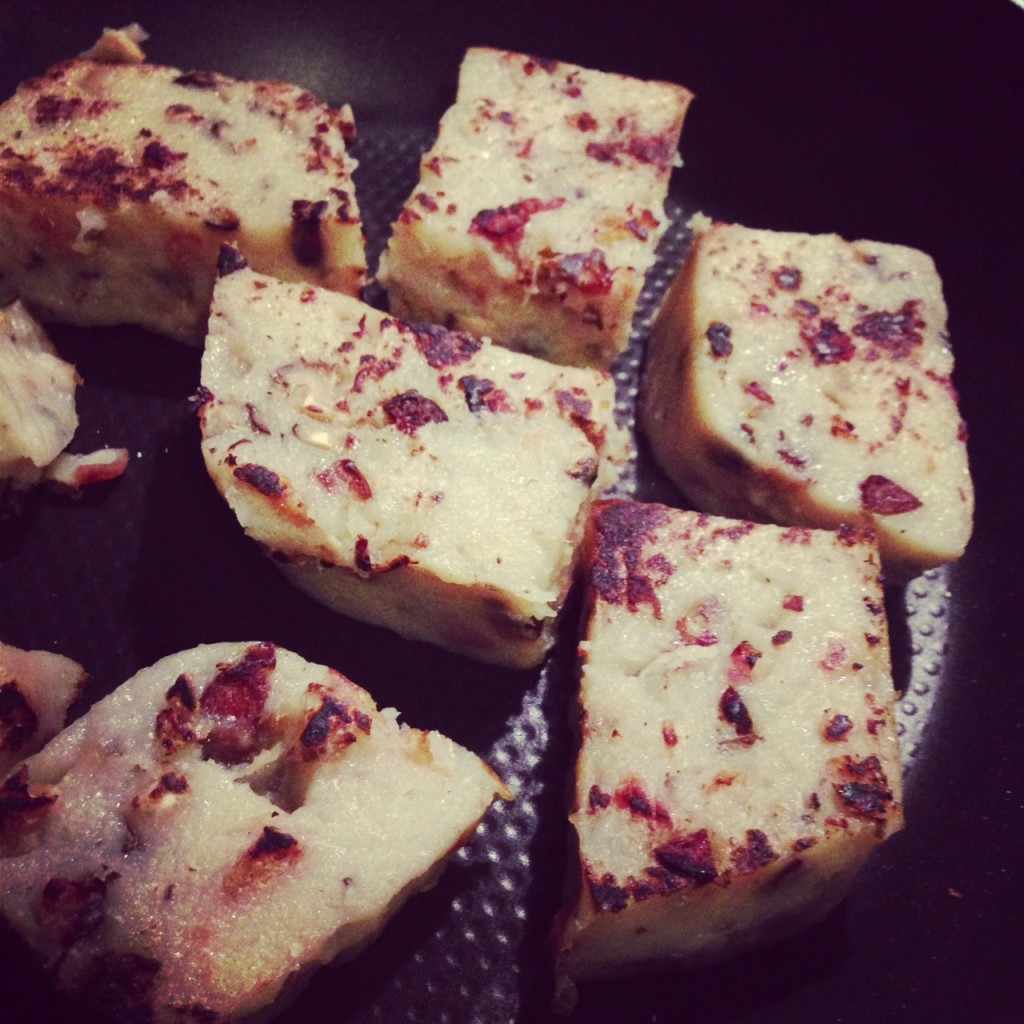 My first dim sum post! How exciting. So as promised, I’ll be blogging Chinese New Year celebratory dishes and here’s the humble radish cake – a symbol of prosperity and the dim sum staple. A dish that can so easily flit from greasy and bland to chewy unctuous yumminess. It’s surprising how common this dim sum dish is as it’s tricky to master, but having failed making this dish so…so many times…This year, I’ve finally got it right.

In attempts of the past I’ve always got several things wrong, but mostly it was the balance of radish to water and flour. So if you find me getting a bit pedantic in these areas you’ll know why. There is no saving a radish cake that has the texture of a rubber door stop. For those of you who’ve never had radish cake, it’s not really a cake in the traditional sense. It’s not a fluffy dessert, but a savoury appetiser of sorts that’s got a lot of preserved and cured meat in it, so if you want to make a veggie version I would suggest sticking with a mix of shiitake mushrooms and maybe some Buddhist veggie meat found in your local Chinese supermarket. This takes absolutely ages to make, so set aside a good few hours at least. I made mine the night before New Year’s day.

*I used 3 types of cured meat. This worked out at a bit of Chinese bacon (臘肉) a small cured sausage (臘腸) and small duck liver sausage (膶腸).

You should have about a 1 1/2 inch piece of Chinese bacon, cut your sausages up into similar sizes. Place all this cured meat into a shallow dish and steam the meat for 30 minutes to soften it up.

While that is steaming, peel all of your daikon. Then on a large chopping that can retain liquid grate all of that radish! Damn. This is super tiring! It took me half an hour to peel a grate this lot. I’m not sure what that says about me (weak. I’m blatantly weak. Not enough Asian stamina), but I just kept thinking of my little Chinese grandmother and the thought that she’s been making this dish six times (on top of another 6 taro cakes as well) for all her children’s families every Chinese New Year…it’s just…unbelievable. Anyway. Grate like a mad person. 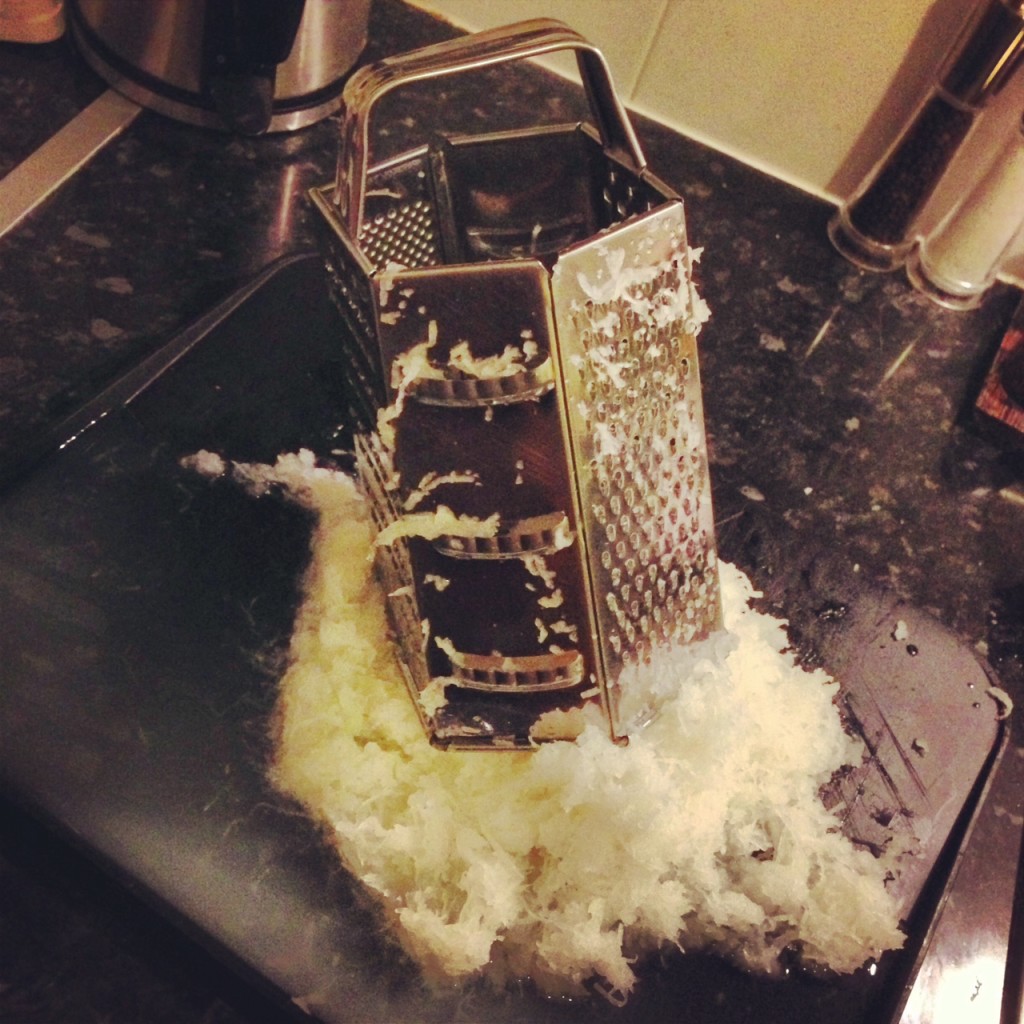 When done place all of the grated radish and it’s liquid into a pot and combine it with a litre of cold water. Bring this all to a boil then turn the heat down and simmer for a further 30 minutes until tender. Once this is done you want to drain the radish but reserve the cooking liquid.

While the radish is cooking you want to deal with the now steamed dish of cured meat. Remove and discard the rind of fat from the bacon and dice your cured meat into little cubes around 0.5 – 1 cm. Reserve the oily liquid in the shallow dish. Set the diced meat aside.

Basically you should have four main components with separate flavoured liquids to accompany them: radish and radish stock; cured meat and steamed juices; diced mushrooms and soaking liquid; shrimp and soaking liquid.

Get a large pot or wok on the stove. Fry up your meat for a few minutes until they start to brown and release fat. Now add your diced mushrooms and shrimp. When fragrant add the meat juices from the steaming dish, the rice wine, sugar and salt. Remove from heat. To this large pot, now add your drained radish, combine well and set aside.

In a large bowl add your rice flour. Now to this add 1 cup of hot turnip stock, 1/2 a cup of the mushroom liquid (carefully avoid the debris at the bottom of the bowl), 1/2 of the strimp liquid (same again, avoid the debris). Whisk up the flour and liquid and pour into the turnip, meat and mushroom pot. Stir throughly it should resemble rice pudding and do a quick taste test (yes it’ll be a bit floury but you want to have enough salt). Whack all of this mixture into a large enough cooking dish. Traditionally we use metal trays but mine with perfectly into a 8 inch diameter pie dish that was 3 inches deep. Nice.

At this point you’ll want to set a large wok up for steaming. Place a trivet at the bottom of the wok and add enough hot water in before it reaches the top of the trivet. Lid on. Boil that liquid to produce steam. Add your dish of radish rice pudding to the centre of the wok without letting the dish touch the sides of the wok. Lid on again and steam for 1 hour, or until the ‘cake’ is firm to the touch. Poke it with a skewer to check that it’s all cooked. Keep an eye on the water and top it up if necessary so there’s always steam. 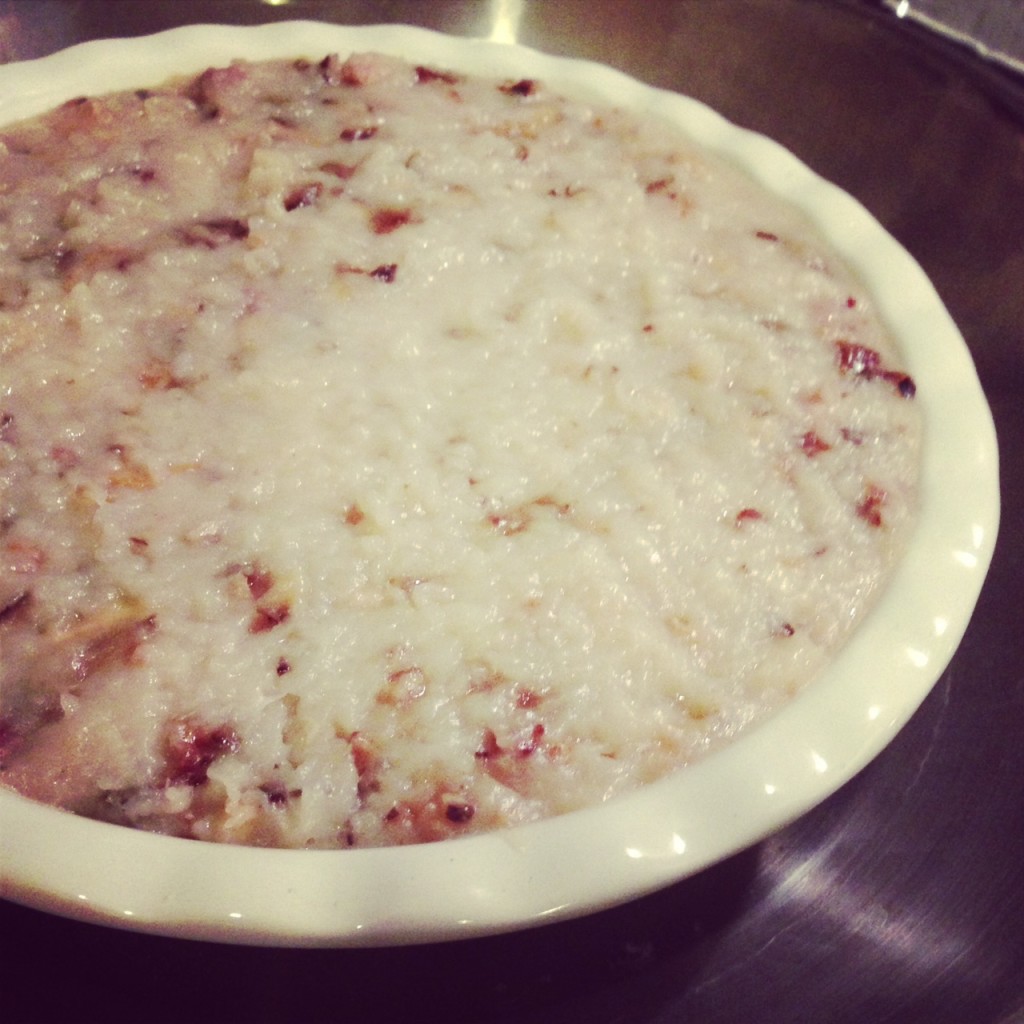 This is what mine looked like when it was done. I was hopping around with joy at 1 am because I knew it was right. Cover and refrigerate for at least 3-4 hours before you serve.

When you’re ready to serve this, you’ll need to carefully cut it into pieces that are approximately half and inch thick. Frying pan on. Heat medium high. Add a bit of vegetable oil (corn or rapeseed good) and fry your radish cake so you get nice crispy cakes. Dish up. Bit of chilli sauce and maybe some soy and you’re good to go.