The Best Damn Cornbread Muffins I Have Ever Made 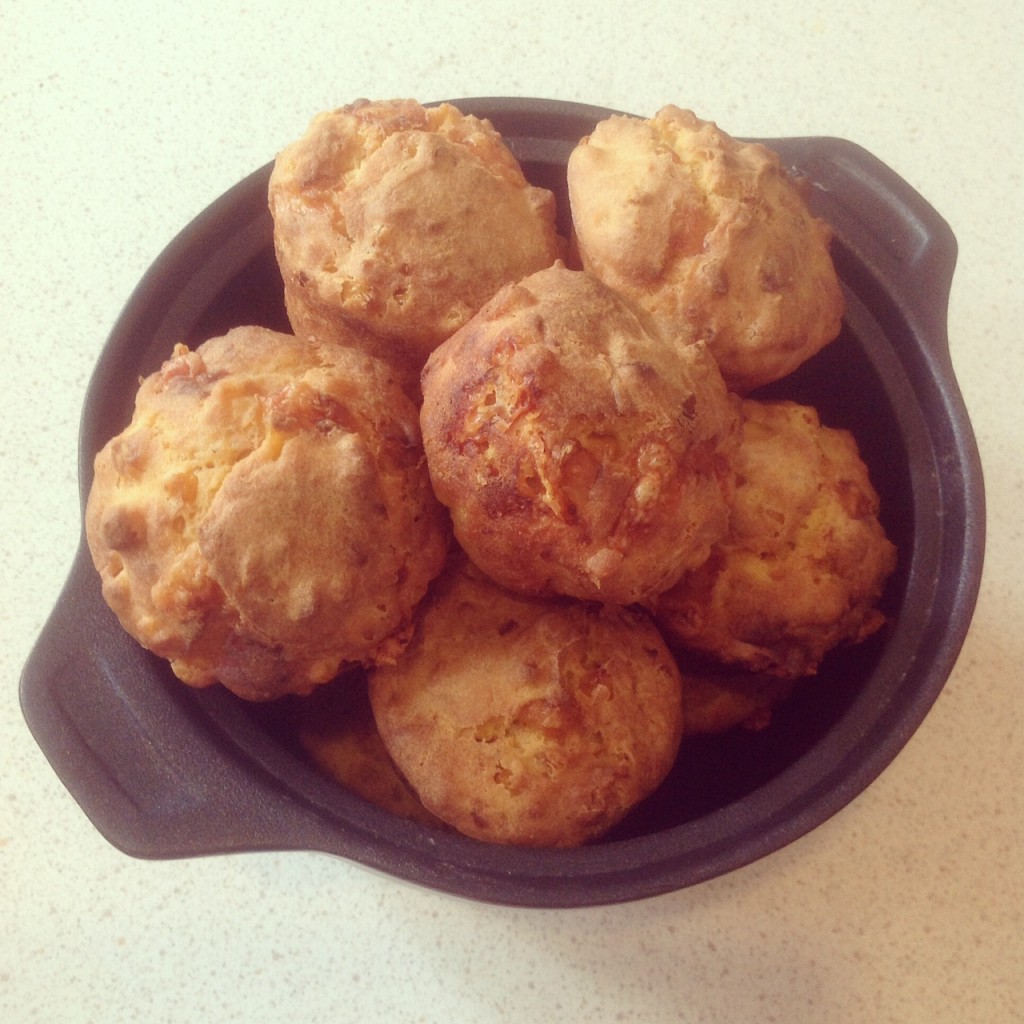 First of all. My apologies. I haven’t posted in such a long time! One of my New Year’s resolutions was to post more, maybe once a week. Oops. But we know how resolutions normally go. Life has just got in the way with all sort of exciting events, trips and parties.

But I’m back now and since Thanksgiving has happened and, though not myself an American, some friends and I gather every year for a Thanksgiving Potluck. Which is *always* something I look forward to in my culinary calendar. This is a recipe from that. I made 2 things that night, a key lime meringue pie and these amazing muffins. I couldn’t believe how yummy these turned out, they’re the savoury variety, gluten-free and made with greek yogurt instead of buttermilk (as I always seem to be too lazy to get to a store that sells it) so I’m going to bravely say they’re healthier too – though I could be lying, they are just too damn delicious. These are way better and less fussy to make than my Spicy Tomato Cornbread so I’m really digging these right now. Makes 12.

Oven to 200°C. With a pastry brush, generously brush the melted butter in a 12 hole muffin tin. I ended up with about a 5mm pool collected at the bottom of each tin.

Next you want to add a small amount of butter to a frying pan at medium heat, and fry up the onions, garlic and sweetcorn. In a pestle and mortar smash-up the whole friend chillies. This seems like a lot of chilli, but you’ll be surprised how much baking these takes the heat out. This is just enough for a kick of heat as you’re eating them with your meal. No point of adding chilli to anything if you can’t taste it! Now add these crushed chillies, oregano, paprika and cayenne to the flying pan. Fry for about a minute until fragrant.

Mix the flour, polenta, baking powder, cheese and salt in a large mixing bowl. In a smaller mixing jug, whisk your eggs, yogurt and milk together. Pour the eggs and dairy into the mixing bowl with dry ingredients, now add the corn and herbs. Gently mix all of this with a wooden spoon until just incorporated.

Divide this all equally into the muffin tray and bake for 25-30 minutes. They should have nicely risen, smell amazing and look lovely and golden brown. Eat them warmed up, you won’t regret making these. So yummy! 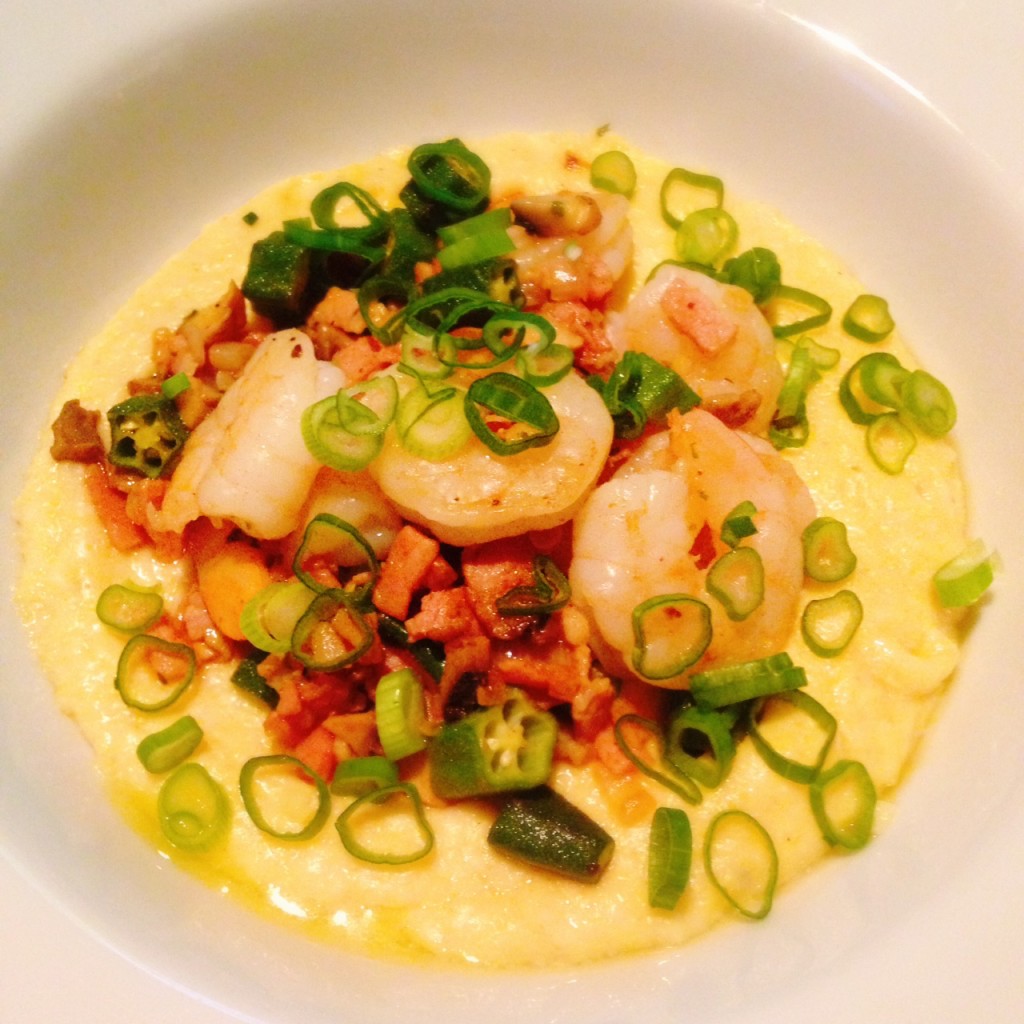 I went to an Asian supermarket Friday evening and bought a rather large box of prawns. Those nice big juicy prawns, not those icky dinky ones. A pad Thai was made (which was delicious but I’m going to absolutely nail it recipe wise so that’ll be a later post)…and then a sort of prawn linguine was made for dinner and yet I still had left over prawns for another meal and I was seemingly at a loss as to what to cook. It was only after browsing a kitchen cupboard and seeing a bag of polenta that inspiration came.

It’s extraordinary how much American food knowledge I actually have in my head and how little I’ve actually been there. There must be some sort of universal love of soul food or at least comforting warming gooey textures that everyone must like. Or at least me. I bloody love soul food.

So for those uninitiated, ‘Shrimp & Grits’ translates to: lovely stir fired prawns (or sautéd if you’re being posh), sat a top a gorgeously unctuous soft polenta.

Get some water boiled first, you’ll need this to make sure the polenta is the right soft texture. Heat the stock in a saucepan, once boiling you’ll want to whisk continuously whist slowly adding the polenta into the sauce pan. This will take approximately 20 minutes to cook. Keep checking and whisking the polenta occasionally. Also keep an eye on the liquid content, you may want to gradually add splashes of boiled water to maintain the correct texture. Aim for a thick porridge constancy, where you can just see the bottom of the pan as you whisk.

Now tend to the topping. In a frying pan at medium heat your oil, and when this is hot add the garlic then the bacon. Once the bacon is nearly done add the okra, mushrooms. Stir fry these for about a minute then add the prawns. Keep stir frying and tossing until the prawns start to turn pink. Now add the spring onions and the tobacco and Worcester sauces.  Season to taste. Get the pan off the heat and finish the polenta.

Your polenta should be cooked and just the right texture now, add the grated cheese. Season should you need to and finally stir in the butter.

In a shallow bowl, spoon in the polenta and make a bit of a well. Now spoon over the prawn mixture and serve with a wedge of lime. 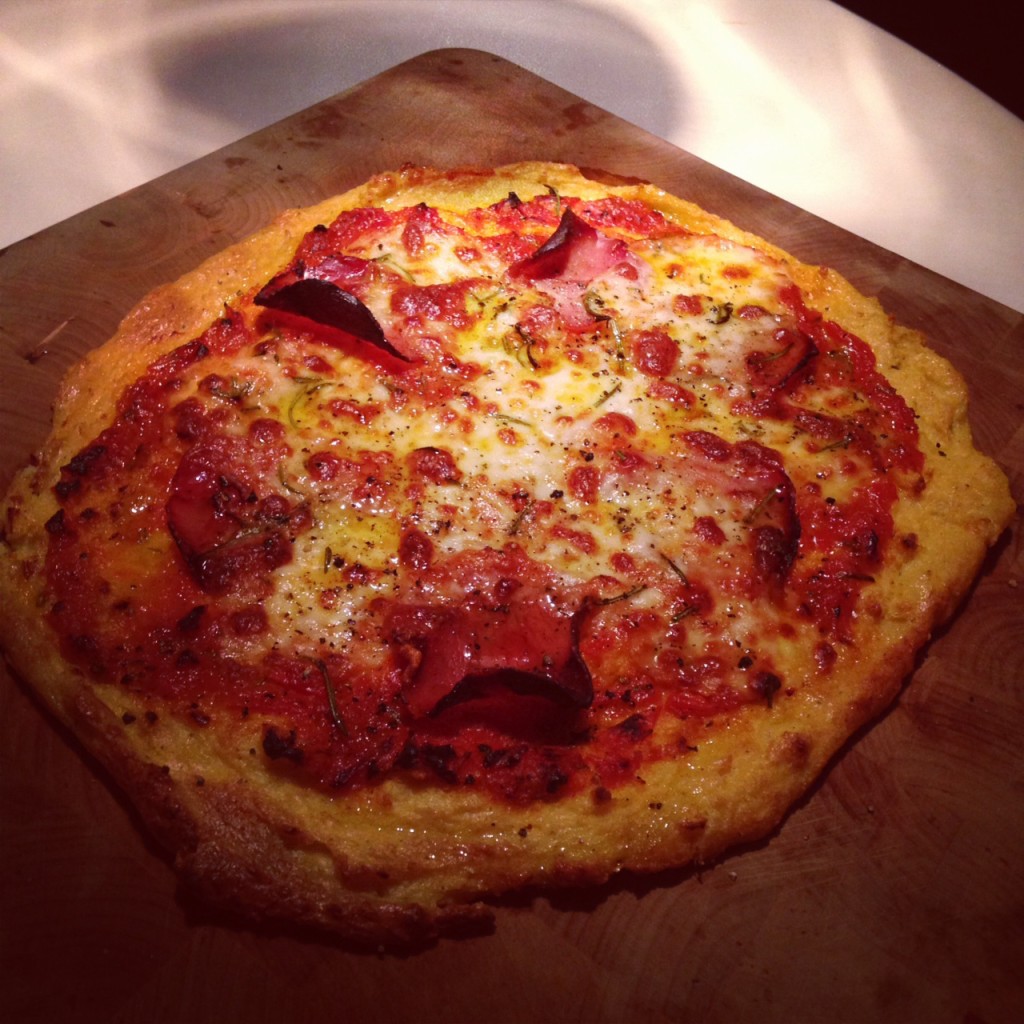 Guys! Guys! Guys! So I’ve not posted savoury food for a while, not because I haven’t been eating (obviously) but because I hadn’t cooked anything that I thought was inspired enough to wax lyrical about. But by the exclamation mark count at a massive three already – here is me waxing lyrical.

Yesterday after what would rank up there as the most Relaxing Sunday Ever where myself and a significant person went for an all day wander through a park which culminated in an impromptu coffee with a friend, said significant person and I decided to make some homemade pizza for dinner. Only what with me not eating gluten we decided to make a polenta pizza and it was so flipping good! Honestly, you don’t even have to be gluten intolerant to enjoy this. Other massive bonus. It can be relatively easy to knock up as you don’t have to wait for the dough to prove. Essentially you’re cooking up some polenta in the traditional manner, but making it as thick as possible so it sets quicker and has a bit more structure post bake. Toppings wise we just went classic with a bit of tomato sauce (but made with plum vine tomatoes), mozzarella, and some slices of cured Spanish ham.

Oil a non stock pan big enough for your pizza.

In a saucepan at medium heat, bring your stock to a boil and while whisking furiously in one direction only (to avoid clumps) add your polenta in a fine stream. Keep stirring at all times to avoid your polenta from sticking to the pan and get this mixture nice and thick and reduced. You want to get it so thick that when you whisk it barely settles back in the pan. At this stage, probably 15-20 minutes down the line (read: strong arms), you want to add the grated parmesan.

Quickly pour your polenta on the previously prepped pan and use the bake of a metal spoon spread out a pizza base shape, complete with slightly raised crust along the edge. Work fast, this will set quickly. Set this aside to cool.

While this is cooling get that oven to 220°C. Make your tomato sauce and prep your toppings. Once your oven is to temperature and your polenta is sufficiently set (cool to the touch and has a nice bounce to it), quickly dress the pizza. Save the olive oil, salt and pepper for when it’s fresh out of the oven. Whack your pizza in and bake it until it’s nice and browned on the crust and the cheese is bubbling. Ours took approximately 20 minutes.

Carefully use a spatula to loosen the pizza from the pan, you should know that the bake is good because it will be crispy on the bottom. Sprinkle on some salt and pepper and drizzle that olive oil. Eat immediately.

I cannot express the sheer amount of pleasure this dish produced, if you’re talking about a great dish of soul food, this is certainly up there and resulted in me doing a happy food dance before I chowed down. 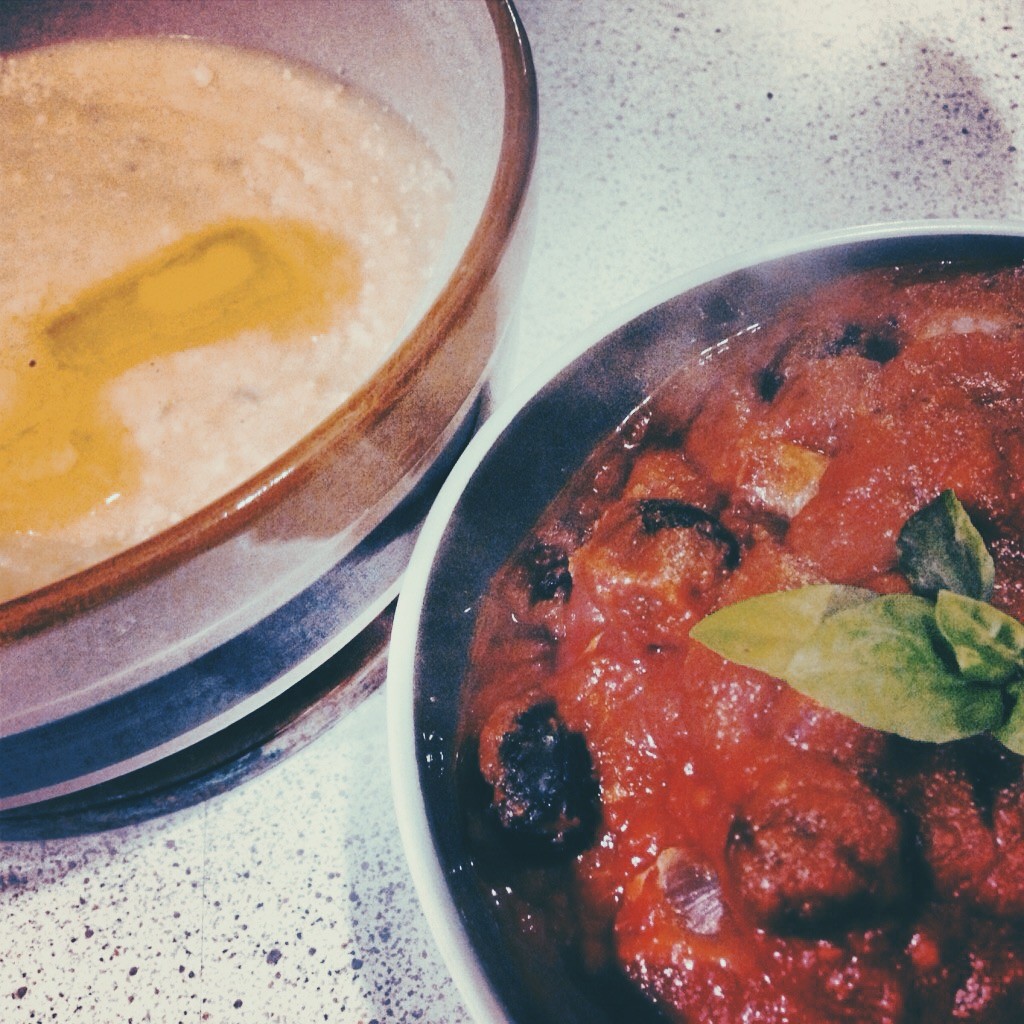 I had a friend over for dinner. It was sort of a long overdue dinner offering that happened to also coincide with me finishing a bunch of DIY in my mini kitchen. It was a delicious little feast, and for the first time in ages, I cooked meat. So here it is, the first official meaty post in my nascent food blog.

The tomato sauce base of this has already been posted so you’ll want to make a batch of that tasty goodness. This will feed two.

Oven to 180°C. On a lined baking tray: season your halved cherry tomatoes, splash ’em a bit with some olive oil and roast them for about half an hour until they blister and practically collapse. Remove and set aside.

Now get your oven to 240°C. Take your duck legs and season them with some salt and pepper. Roast them on until the skin is lovely and crispy (10-15 mins, maybe). When all crispy, lower that oven’s temperature to 200°C and roast these bad boys for about an hour until they’re tender. When done, set them aside and save the cooking juices and meat drippings for later.

When the duck is cool enough to handle. Remove the skin (and eat it! Haha, that’s what we did) and pick off the meat. Roughly chop the larger bits so you get nice sized bits of meat. Set aside.

Get a large pot on the stove and at medium heat, now heat up your tomato sauce. Add olives, some black pepper and all the dripping and cooking juices from the duck. Bring the sauce to a simmer for 30 minutes or thereabouts until it is very thick. Ragu gloopy thick. Add the duck legs and cook this for a further 10 minutes. Just before you’re about to serve your ragu, stir in the roasted tomatoes and toss in some chopped parsley.

I served this with soft polenta. I am always making up my polenta to taste and by eye. But this is kinda what you need:

In a heavy bottomed pan, get some water to a boil. You’ll want to think of proportions of food to serving amounts I suppose. So a cup and a half of water per person. Get a whisk and vigorously whisk that water in one direction only, this stops the polenta from getting lumpy. Now carefully add your polenta flour a handful at a time while whisking. This stuff cooks and expands fast, and before you know it, you’re polenta’s too thick and you’ll need to add more water and end up with way too much polenta (which isn’t a bad thing, pour leftovers into trays and griddle the firmer polenta cakes the next day…I bloody love polenta)…anyway, one handful at a time. When it’s at the consistency that you like, add a load of cheese in to taste and season. Serve up with a blob of unsalted butter.

I also served the ragu with a side of griddled asparagus. You really don’t need to do much with these. Bend and snap off the chewy parts of the asparagus spears. Hot griddle pan. Splash of olive oil. Griddle them. Serve with sea salt and freshly squeezed lemon. You can serve these with shavings of parmesan as well, but with all the cheese in the polenta, I didn’t want to over parmesan the dishes out. 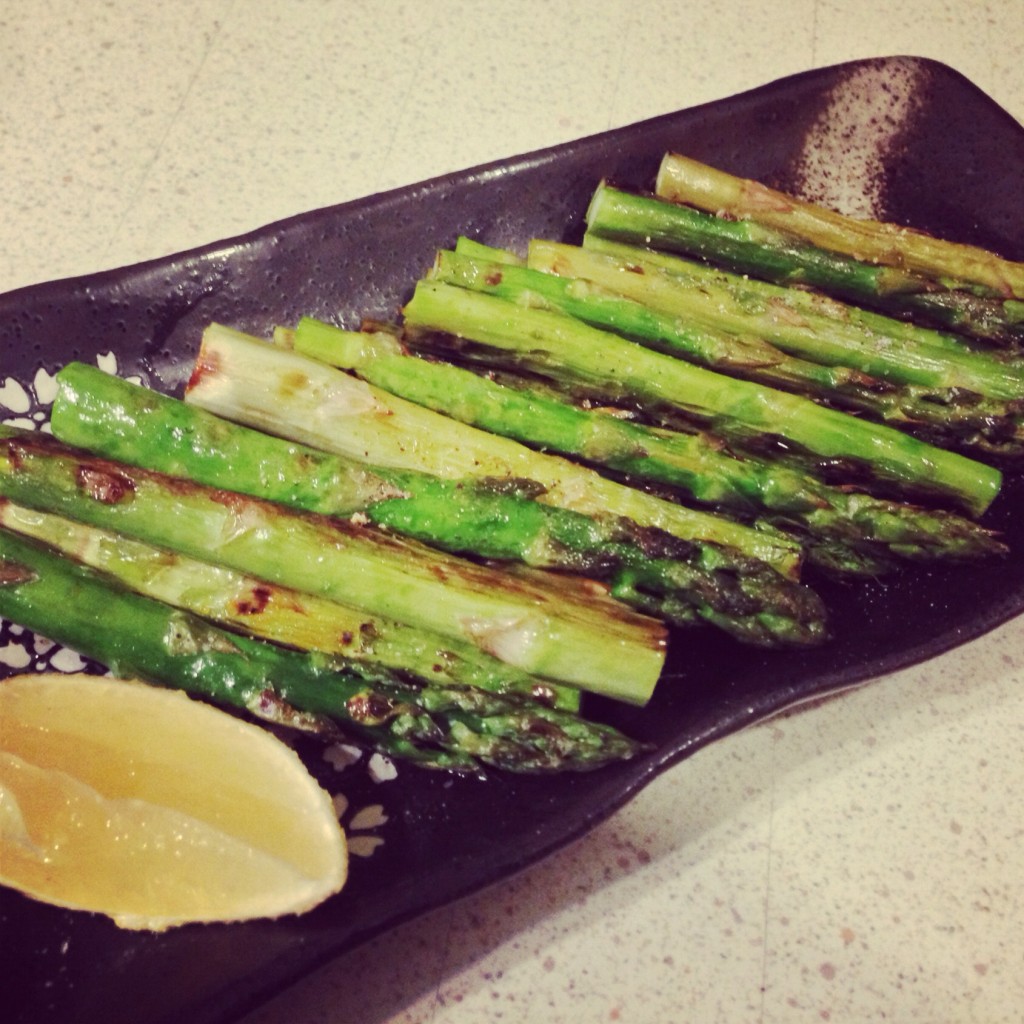