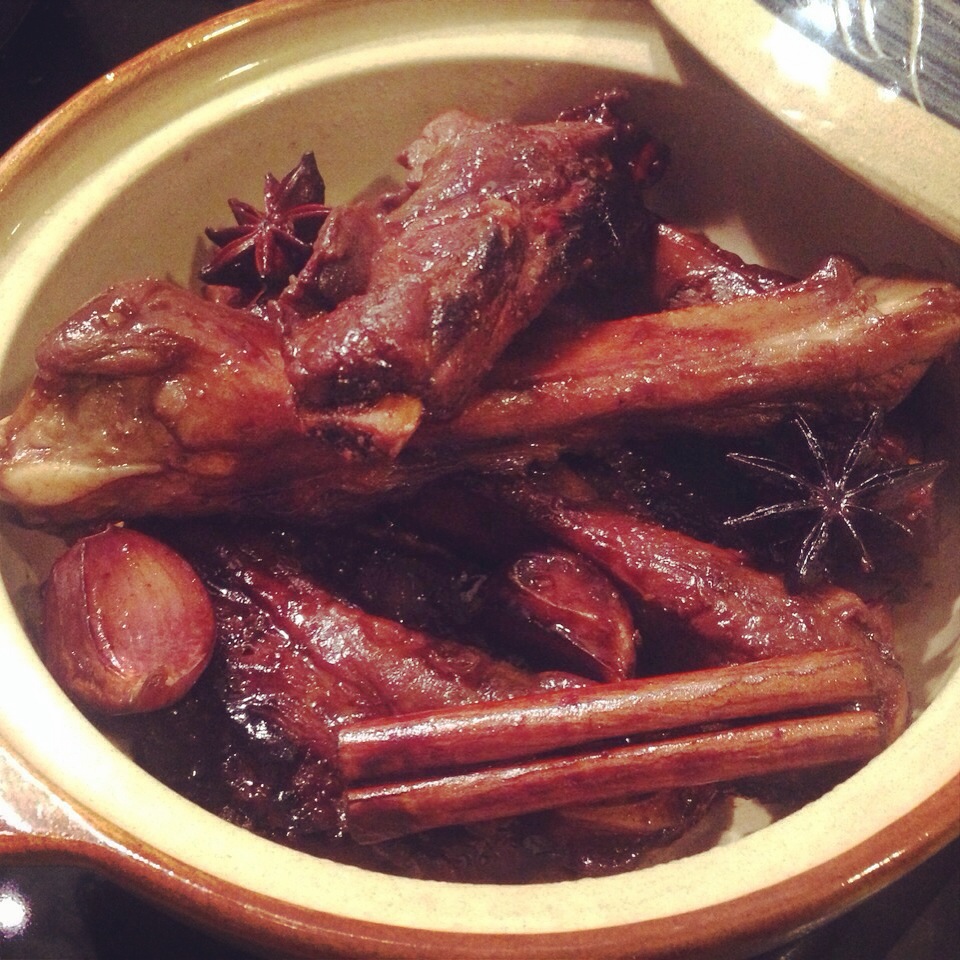 I’m going full veggie this month, and I’m actually looking forward to it. As someone who used to be veggie and is now with someone who I can only describe as a Carnivore, I’m happy to cut back on the meat to be honest! I am however *very* surprised that they are going veggie with me too. Over valentines as well. This should be interesting!

This is obviously a meat recipe, but I’m a bit behind and I’m requested to cook these quite often. So here they are, some yummy sticky ribs..

Marinade the pork and the dark soy for at least half an hour.

Break up the garlic head into individual cloves with skins still intact.

Wok on medium-high heat. Once hot add the oil. Wait a bit for the oil to get hot and add the garlic cloves – toss for 1 minute. Now add the cinnamon and star anise and fry for another minute. Once lovely and fragrant add the pork ribs and lightly brown, then add the light soy sauce, sugar and water. Keep stirring until the sugar has dissolved.

Bring the heat low and gently simmer lid off for 30 minutes. Keep and eye on it and stir frequently to keep the meat from sticking to the bottom. Then cover and simmer for an hour or so. Do keep checking on the ‘Sticky Factor’ you want the sauce lovely and thick. Sprinkle with sesame seeds and a sprig of coriander if you’re being fancy. I’m probably too busy eating these with my hands to care! 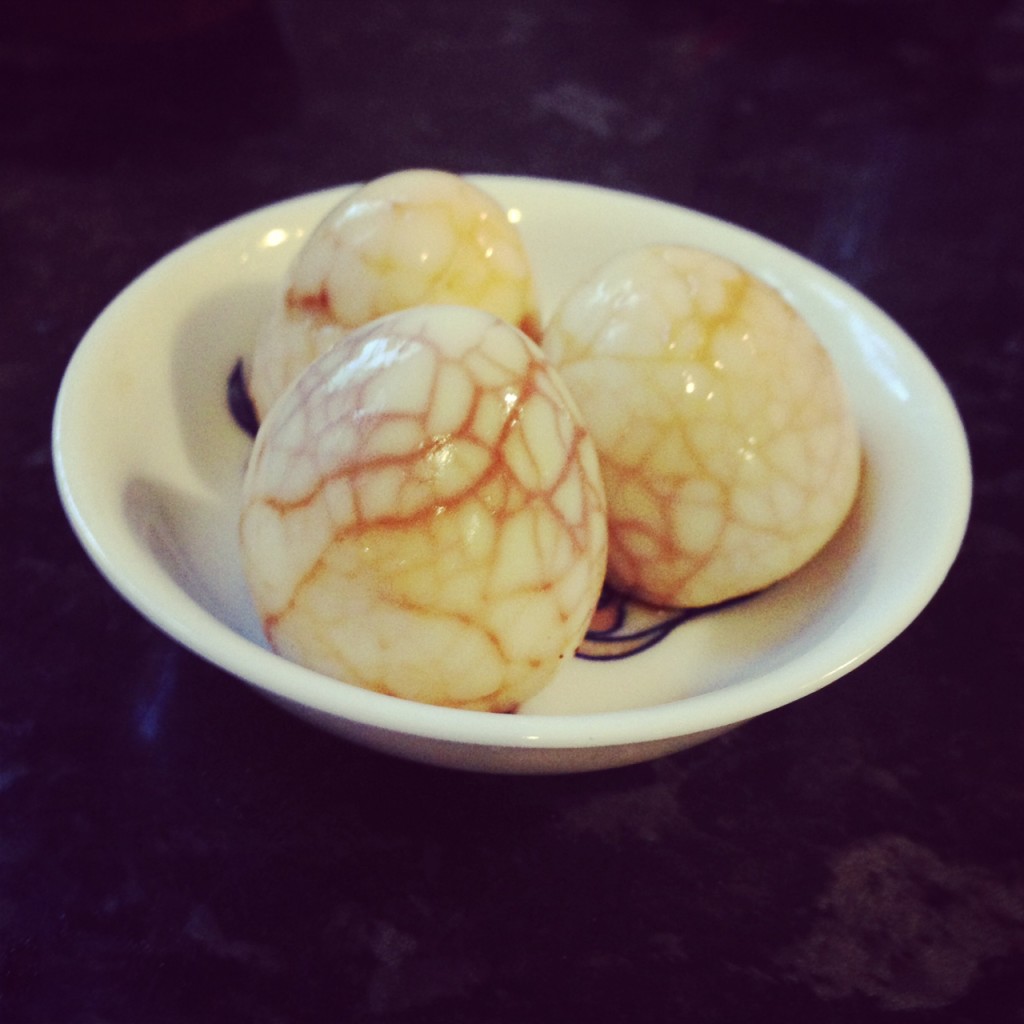 I love tea eggs, they’re so yummy, the smell of them cooking reminds me of home, and they look so pretty with their marbling. For Chinese New Year I made quail egg versions so guests had little tasty morsels instead of a whole chicken egg. Traditionally you leave the shell on and peel it when you want to eat it, but I didn’t want my friends faffing around with all that peeling. I’m not sure, however, that I would recommend peeling 36 quail eggs…

Below is a recipe for 6 chicken eggs or 18 quail eggs.

Put a pot on the stove and start boiling the water. Wash your eggs and place them in to boil. If using chicken eggs – boil for 8 mins; Quail eggs – 2 minutes. When they’re done, remove them with a slotted spoon and let them cool off until you can handle them. With the back of a metal spoon you want to gently bash the eggs all over, you don’t want to pierce the membrane just beneath the shell though, so don’t get too carried away. I think smaller cracks are prettier.

While you’re doing this add the soy sauce and all the other ingredients to the pot of just boiled water and bring it all to a boil again. Simmer the tea leaves for 5 minutes.  Now add your pre-cracked eggs and turn the heat off. Remove the pot from the heat source and let it cool to room temperature. Once cooled, decant everything into a large enough sealable container and steep them in the fridge for at least 8 hours. The longer you leave them. The better they taste. 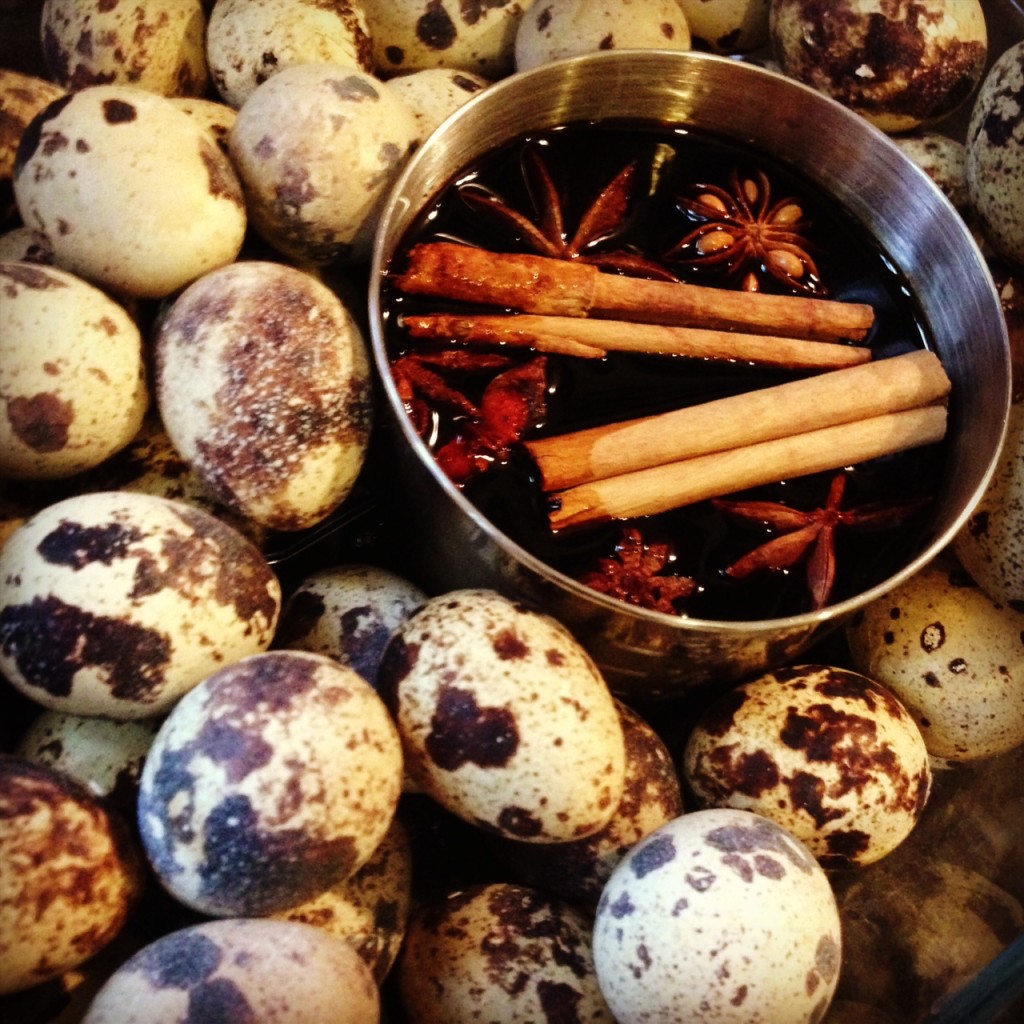 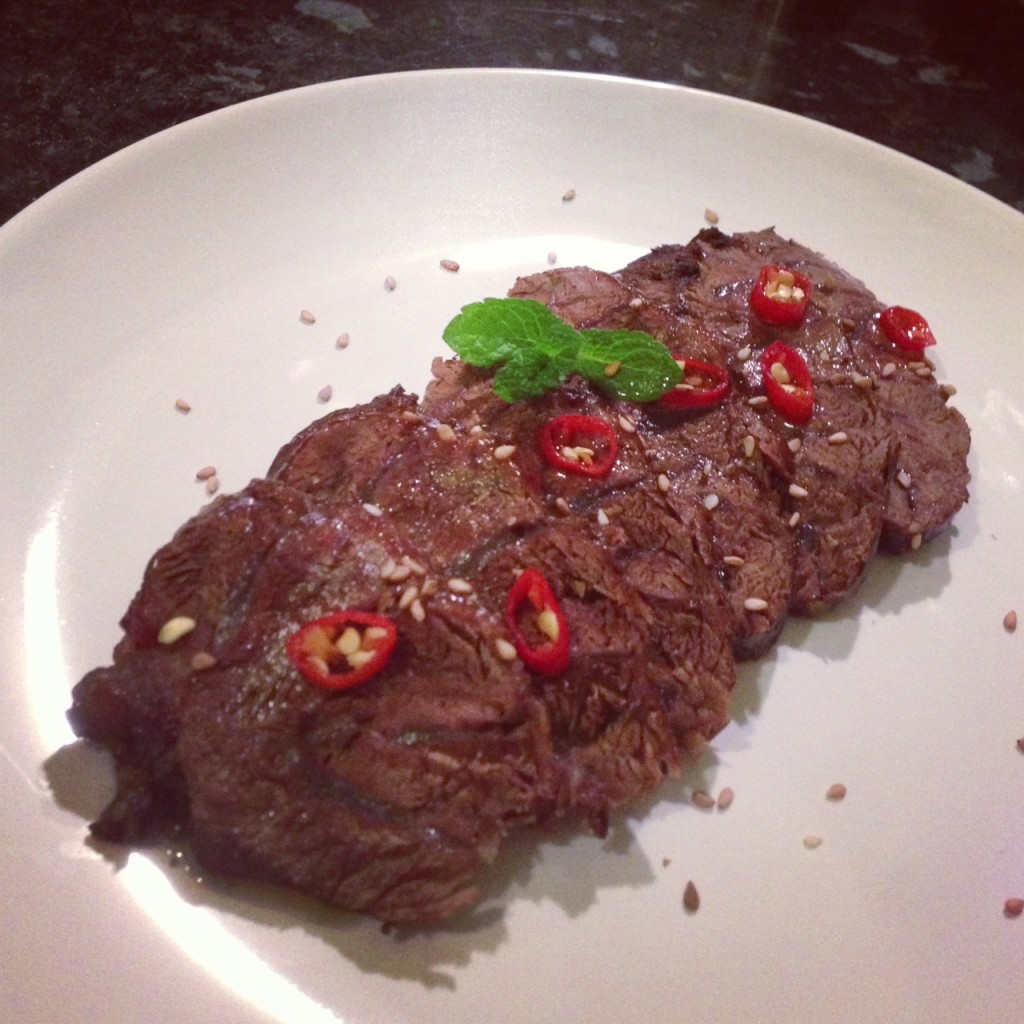 Whenever my mum throws a party, there are staples that family and friends expect to be served. Of these are drunken chicken wings, and red-cooked beef shin or turkey gizzards (which may sound totally horrific to those uninitiated, but my god, gizzards are delicious). So this Chinese New Year I decided on the beef shin and found myself making a large pot of aromatic red broth to braise my meat. I actually tried to source some turkey gizzards, but I think all the local butchers I called around thought I was a bit loopy. Oh gizzards. I shall find you one day.

I remade this again last night because my guests who were as quick and hungry as gannets gobbled it all up before I could take a picture. I doubled this amount to be a bit of a nibbly appetiser for around 20 people. So, below will probably be a starter to serve 4?

Get a colander in the sink. Rinse the meat in cold water, trim some of the outer fatty bits if you must. Then take some boiling water and douse the meat to seal it a bit.

Chop your shallots fry them in a bit of vegetable oil until fragrant – remove and save for later. With a peeler, peel the orange rind off in one long spiral. Now get a pot and put the water, soy, sugar, shallots, orange peel and and spices (basically all the ingredients but the sesame oil) into it. You want the pot small enough that when you add the beef it is completely submerged in the braising liquid.

Shin in and bring it to a boil, after 5 mins turn the heat right down to a simmer. Notes from my mum said ‘braise for at least 40 mins until tender’. I ended up simmering it for 2.5 hours. You want to check the water level is always submerging the meat, and maybe flip it around every so often so all sides get infused with the flavour. Check tenderness with a skewer, it should be soft enough to melt in the mouth but still have structure when you slice it.

The absolute best thing about slow cooking with shin is the ribbons of tendon and fat which render down into impossibly guilty deliciousness. You can just about see the marbling in the photo above.

Once tender, remove the beef from the braising liquid and let it rest for 15 minutes. Now thinly slice against the grain of the meat and serve with a drizzle of sesame oil and a splash of the red braising broth. If I were to be a bit more organised about this, I might even scoop some of the red broth out into a smaller pot and reduce it down into a thicker dipping sauce. So maybe you wanna do that if you have time. 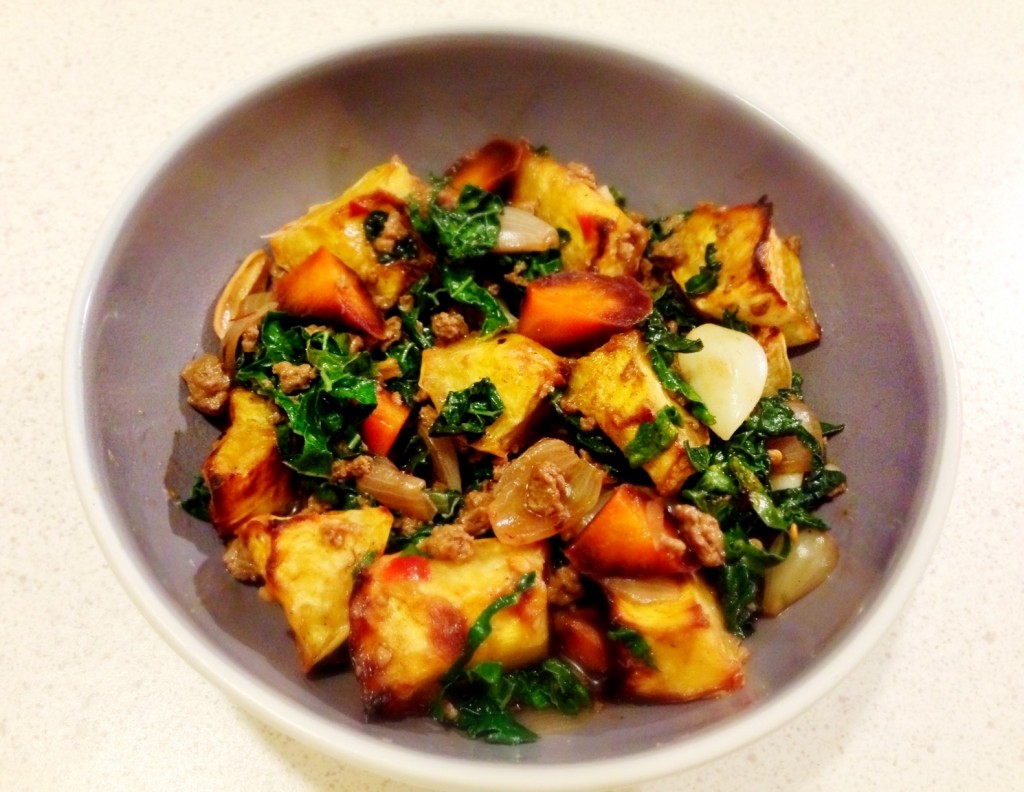 As the title suggests, this is a Chinese stew type dish which really reminds me of wintertime in Hong Kong. And after these past few cold rainy days, I really needed some HK styled comfort food. The type that has gloriously squidgy textures and an oyster saucy gravy that goes divinely with plain steamed rice. This is rather hilariously made with posh versions of all the 3 main ingredients of pumpkin, carrots and kale (Casperita squash, purple carrots and cavolo nero), obviously you can substitute with the more easily found versions in your grocery isle. I’ve also used Quorn mince instead of proper meat mince, if you would like to use real meat, go for pork mince. Failing that, turkey or chicken.

Oven to 170°C. Chop up your squash and cut it into smallish chunks, I left the skin on because I like the extra texture after roasting, toss them in a bowl with a bit of oil, white pepper and some salt. This is probably where the recipe isn’t strictly Chinese as not everyone has an oven back home, but I really like the slight crisping of the edges roasting provides. Roast until tender about 30-40 minutes.

While that’s roasting. Pan on the stove. Medium-high heat. Heat the oil then sauté the garlic and shallots until slightly tender. Add your smashed cardamom pod, star anise and cinnamon and fry to release some nice smells. Now add your mince and brown a bit. Carrots, the 1/2 cup of water, oyster sauce and the chill bean paste go in next. Cover and cook until the carrots are tender. The kale goes in last for a couple of minutes. Taste and adjust seasoning.

The optional cornflour should be used to thicken the sauce at this point. In a small bowl, mix thoroughly with a tablespoon of cold water and add it to the pan and stir in well. Be careful! Too thick and it becomes horrible Chinese takeaway gloopy – and nobody needs that. Stir through your pumpkin and serve up. There should be enough to feed two. Or, one very hungry small person…