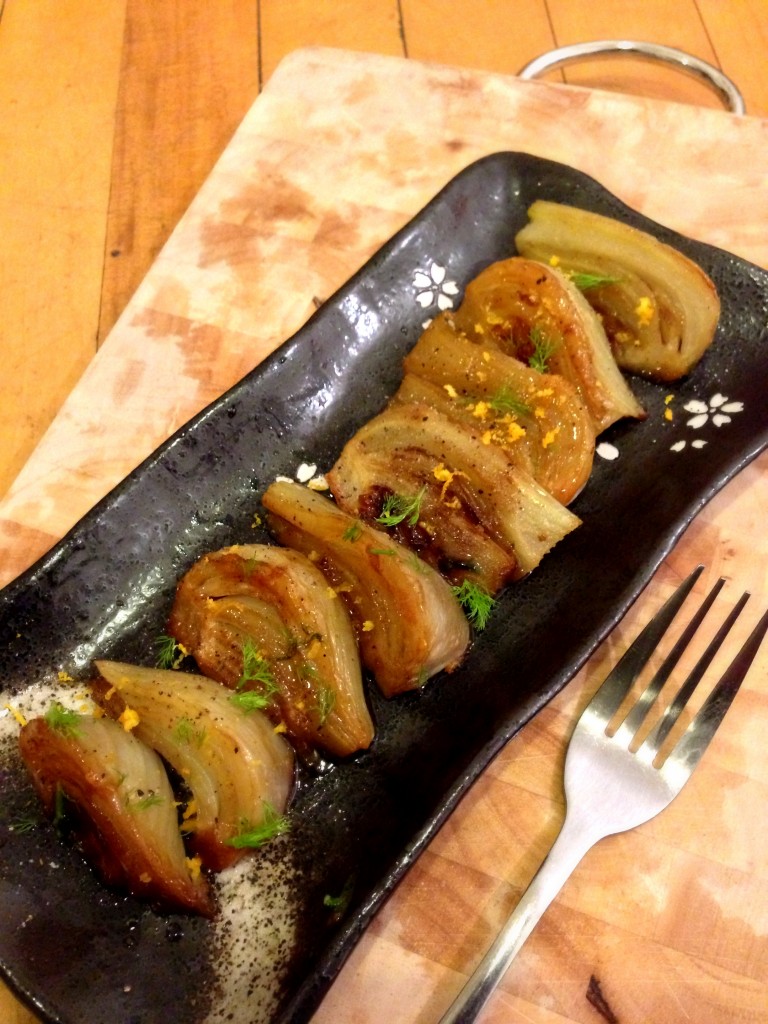 Some fennel arrived in my veg box this week, and I was left in a bit of a quandary. Since the Queen’s Jubilee celebrations this year, where I suffered a particularly bad Sambuca related incident, I have been unable to come within 10 feet of the stuff without gagging and likewise with anything resembling the aniseed tipple. Cue the mild consternation at my veg box opening. Can I even prepare the veg without feeling nauseous? How would I serve the fennel without strange Queeny related flashbacks?  The answer is braised. Braised in an orangy saucy gravy.

The original recipe actually required Sambuca, Pastise, Ouzo or any other aniseed flavored booze. Um. I really had to substitute this for Cointreau, and I would highly recommend any fellow Sambuca Sufferers to follow suit.

Trim the top off your fennel bulb, remove the fronds and lightly chop them up and set aside. You want to divide your bulb into 8, pieces. Keep them attached to the core so they don’t fall apart when you’re cooking.

Set a wide enough sauté pan on the hob where you’ll be able to brown each piece of fennel in one layer. Set it to medium high heat and melt your butter. Bring the heat down a bit and lay all you fennel bits in. Nicely brown one side. This should take around 4 mins. Sprinkle over the salt and sugar for caramelization. Turn to brown the other side.

Once evenly browned. Increase the heat and add your alcohol. This should quickly boil down. When it’s almost entirely evaporated, add the stock and water. Once this liquid starts boiling, bring the heat down low. Cover the pan and simmer for about 15 minutes. While this is simmering grate your orange zest – set aside.

15 minutes up? Remove that lid and let the sauce boil down to a glaze. Add a pinch of the fronds and the half the zest. Gently combine.

Plate up. Brush the saucy gravy goodness on the fennel. Sprinkle with the rest of the fronds and zest. Squeeze over with the orange. Done.

I can report that I ate the lot. It’s delicious. I even managed to share some with a friend with similar aniseed aversions and they didn’t gag either. So, a win in my books methinks.